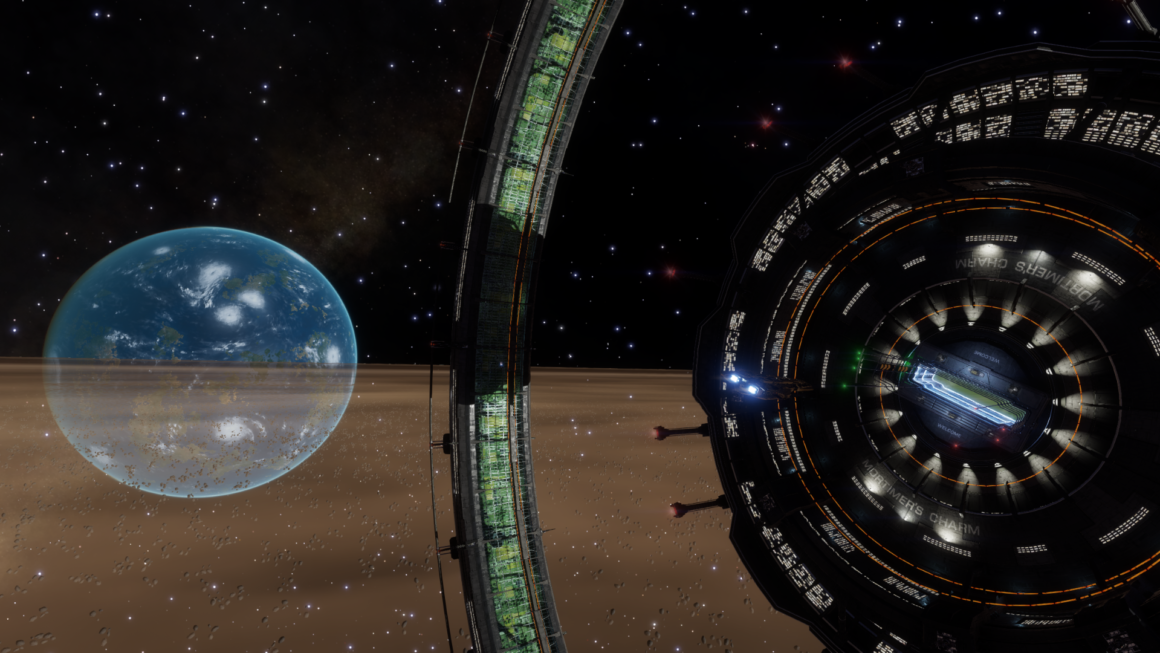 This is a continuation of the Elite Dangerous post series, where last time I wrote about ships. Obviously, flying a spaceship is an important aspect of the game, but it is equally important to have some places to dock at.

In my first post Let’s have some fun with Elite Dangerous I have briefly described different kinds of stations that are present in the game. In this post, however, I’d write a bit more about them, share why do I love visiting these stations, as well as what has changed since my original post.

As described in the previous post, spaceports are the most popular and most typical for the Elite series. They accommodate all sizes of the ships and characterises with the mail slot entrance.

There are three types of spaceports: Coriolis, Orbis and Ocellus. They are huge space cities with an artificial gravity created by the rotation of the station. While all of them look different they have the same set of landing pads (15 small, 18 medium, 9 large) and can have the same facilities (which varies however on the system, government and other external factors). What I do like about them is that there are variations within these station types and it is fun to visit them and see how they are different from each other. Even after so many years of playing the game, I love to watch them and I still love the experience of docking in them.

Besides external differences, all of these stations may look different inside too which depends on the station economy and size. The different look applies to station interior with landing pads as well as concourse – oh yes, with Odyssey update it is possible to disembark and visit concourse that facilitates various services but also has a nice view on the landing pads, allowing to watch station traffic ❤️.

Speaking of services within the concourse, it is possible to visit the following places:

Okay, so let’s enjoy some views!

Agricultural economy – I actually love these interiors the most as space lacks green! The agricultural stations produce food and textiles.

Extraction / Refinery economy – this is a quite common view as a lot of stations have this economy. Also, there is usually a lot of business here for miners or traders.

Standard / industrial economy – a very typical station view. It is most common as stations with a smaller population often have this view too.

Service economy – it is the rarest station view, that can be spotted only in very rich systems.

More information on the market economy can be found on the Market Economy wiki page.

Besides these stations, there is also an Asteroid Base type spaceport. It also has a mail slot entry and interior with landing pads, but unlike other spaceports, this is built within the asteroid – which by the way is pretty cool! Of course, the interior has a unique look too. Finally, this station has a bit fewer landing pads – 4 small, 8 medium, and 6 large.

Outposts have 2-4 small pads and 1 medium. They have no large pads at all, which means that large ships cannot dock at them.

Outposts also have concourses but unlike spaceports, they do not offer Inter Astra nor Vista Genomics.

Surface Ports are located on landable planets. There are two types of them:

The number of landing pads varies for these ports (2-4 small, 2-4 medium, 2-8 large), but all support all sizes of the ships.

The Surface Ports allows using SRV vehicles to dock/undock them. They do offer also the ability to disembark and visit a concourse with a nice view over the port. The concourse offers the same services as the spaceport.

What is worth noting here is that with Odyssey it is possible to land on planets with tenuous atmospheres and some of these planets do have Surface Ports. Visiting them allows observing beautiful sunrises and sunsets.

Introduced with Odyssey update, these are small planetary settlements that can be docked at. All these settlements have 1-2 small landing pads but only a few have also 1 medium or/and 1 large one. Also, these landing pads do not have internal hangars. Pilots need to be careful as well because the docked ship is still vulnerable to attacks from other ships, SRV and personnel.

These settlements offer similar, but limited services to other station types, especially because of the lacking hangars. They are mainly designed for in-person interaction as they hold a set of buildings that can be entered as well as terminals, lockers and other interactable objects. Of course, there are also people in. There is a host of missions available to choose from in the settlement, like:

With previously mentioned Frontline Solutions it is possible also to enlist for combat within the settlement to defend or conquer it when there is a war between two minor factions.

Currently, there are three types of mega-ships that can be docked at:

All these vessels have all types of landing pads and can accommodate all kinds of ships.

Fleet Carriers are player-owned. They have 4 small, 4 medium and 8 large pads. Players can install various facilities like refuel, repair, rearm, shipyard, outfitting, Universal Cartographics, Redemption Office, Black Market. They may also choose what commodities the fleet carrier buys/sells. Finally, they can choose who can dock on it.

With the upcoming update, the carrier will also have a concourse and facilities related to on-foot gameplay.

My thoughts on the stations

When I fly Krajtek, I love to visit outposts. I always approach them on boost just to slow down near the landing pad and sit down without usage of the autopilot. There is this kind of ease when approaching or leaving them. I also like the sounds when landed on unsanctioned station type. It is something cool about it. Concourses are quite compact there but I really like the bar area, especially the arch-styled entrance. Sometimes it is possible to spot outposts near the asteroid field – the view is amazing. It is a bit of shame that there are no more viewing areas in the concourse as not always the view from the main window is the best one. It would be great to visit other parts of the station with the viewpoints.

I need to admit that I visit spaceports most of the time though. They are most practical, allow large ships to land and have a nice view from the concourse. I really like the agricultural, tourist and wealthy interiors. High-tech looks cool too, but I love ones with a bit of green, as it is so scarce in space.

Visiting planetary stations requires additional hassle and time as it is necessary to approach the planet, glide down to the station and then land. Often the target system is behind the planet so departing is also much slower than leaving the space stations. Having said that planets with thin atmospheres can look really lovely and it is worth visiting these stations just for a view!

With odyssey settlements, there is currently not that much that can be interacted with. For example, there are very beautiful touristic settlements with bars and nice habitats but none of it can be normally interacted with yet. At the bar, it is even not possible to speak with the barman and the Mission Provider person will happily give me the murder mission instead of something related to visiting a tourist paradise. I think that at some point the content will get richer and these settlements will become really interesting places.

I am looking forward to what the next Elite Dangerous updates bring regarding stations. I hope that over time the walkable area will get bigger, with more things to interact with and new viewpoints. I also hope the settlements will get richer with interaction options based on the settlement type, like using the bars or habitats in the tourist settlements. Speaking of bars and concourses, I would love to be able to sit down, order drinks or learn a few gossip from the barman. It would be also great to enter the Crew Lounge too and hire an NPC crew by speaking to them! Let’s see what the future will bring 🙂